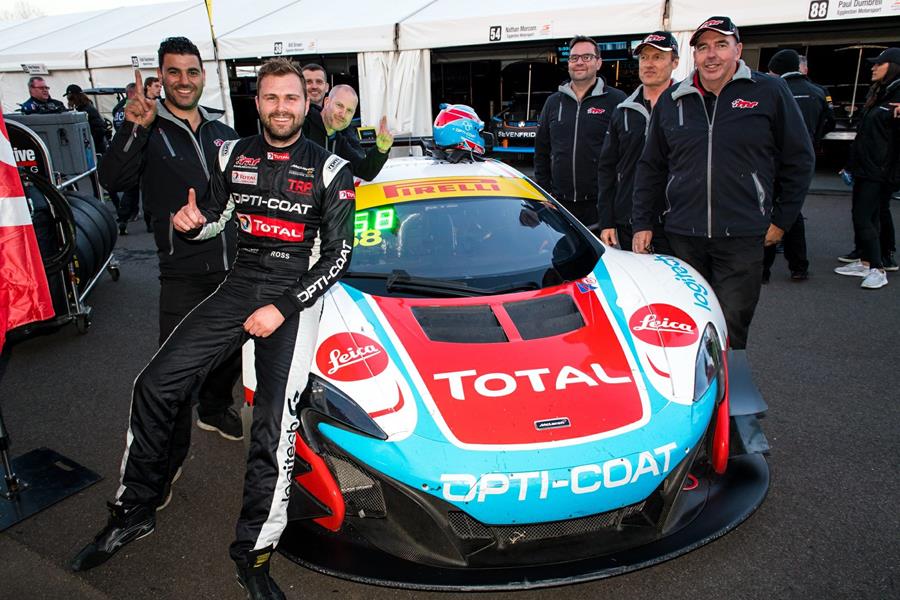 Total would like to congratulate Fraser Ross on a spectacular weekend of racing!

Total Oil Australia sponsored driver Fraser Ross has completed his most successful Australian GT event to date, finishing with results of 2nd, 6th and 1st across the weekend for 2nd overall. On Friday in mixed conditions, Ross was able to place his McLaren 650S GT3 in 1st position in practice before finishing 5th in qualifying. The solid performance ensuring a reasonable starting position for race 1 on Saturday morning.

After starting on the third row of the grid for race 1, Ross was able to negotiate the slick conditions to slice his way through the field to finish in 2nd position, equaling his season best performance to date. Unfortunately Race 2 served as a minor hiccup in what was an otherwise fantastic day for the team. After making an incredible start off the front row of the grid Ross suffered at the hands of Liam Talbot's spinning Porsche 911, ensuring a 6th place finish was the best Ross could manage after being down on speed throughout the middle portion of the race.

Race 3 proved to be the highlight of the season for Ross, fighting through the field from 6th on the grid to finish 1st by 1.5 seconds over Liam Talbot. Ross' ability to race aggressively, yet cleanly impressed spectators and commentators alike.

"Pumped with my first win in Australian GT! P2, P6 and P1 in today's races means we finish up in P2 for the round. Mega way to finish off the weekend! Huge thanks to McElrea Racing! They did an amazing job and I'm so happy I could get the win for them! Huge thanks to our partners for making it all possible!" Said Ross on social media on Saturday night.

After showing that he possessed the pace on many occasions throughout the season, it was a well deserved result for Ross who would finish the 2017 season 4th in points. Congratulations to Fraser on an awesome debut Australian GT campaign!